Crossover SUVs are some of the most popular types of cars in the United States. These vehicles are best for those who need to have more storage space, great prices, and improved technology.

If you’re wondering which crossover SUV you should get, you’ve come to the right place. Below we’re going to go over our favorite ones on the market.

The Mazda CX-5 is best for those who are looking for something that provides both luxury and comfort. This SUV is known for having some of the best handling and responsiveness on the market. The best price you can get for the vehicle is $26 370, which is pretty inexpensive compared to other options out there and has optional all-wheel drive.

While the Mazda CX-5 is luxurious, the company didn’t sacrifice comfort for looks. It is both comfortable and sporty, making it a great, all-around vehicle for everyone.

The Tiguan was one of the most shocking vehicles to hit the market when it first came out. This SUV is relatively small and can fit into most streets or alleys. That being said, it doesn’t cheap out on storage space or technology. The Volkswagen Tiguan features a 184 horsepower engine and four turbocharged cylinders. While some crossover SUVs are more on the sporty side, this one focuses primarily on comfort.

The Honda CR-V provides customers with a sleek look that is classy and functional. As of 2020, the car has a 1.5-liter four-cylinder engine. Previously, this feature was available as an option. This SUV has some of the best cargo space out of any other car on the market. You can also buy a hybrid version of the CR-V, which provides you with better fuel-efficiency and a reduced environmental footprint.

The Toyota RAV4 is one of the more expensive crossovers on our list, being that it sits at just over $27000. This SUV screams one thing: functionality. From the exterior design to interior specs, everything about this SUV is conceived to create a car with better fuel economy and more power. You can also buy the Toyota RAV 4 Prime, which allows you to have up to 40 miles of electric-only driving. The only reason this car doesn’t make it to the top of our list is that its four-cylinder engine can be loud at times.

The RAV4 Prime has 302 horsepower, making it one of the most impressive SUV crossovers on our list.

The Nissan Rogue has been shown on commercials and television shows alike. In recent years, Nissan has made some drastic changes to its Rogue models. These changes range from better seating arrangements and more comfortable material to a quicker engine. The newer Nissan Rogue models have 181 horsepower and also happens to be more fuel-efficient than the models before it.

The Nissan Rogue retails for $28 145 and has optional 4-wheel drive.

The Subaru Forester hasn’t changed much in recent years. That’s most likely because the SUV crossover had winning specs from the start. With all-wheel drive, plenty of room in the car, excellent cargo, and award-winning safety features, it’s no wonder why this car has made it on our list.

The Subaru Forester has features like automated emergency braking, lane centering, departure, and a reminder system for the rear end of the car. All of this comes at under $26 000.

The Hyundai Tucson is one of the most underrated crossover SUVs on the market. It’s a jack-of-all-trades and is an incredibly competent car. It has good passenger and cargo room and is equipped with a 7.0 screen. This crossover SUV can also have additional features added to make it more durable and provide it with better performance. You can, for example, opt to equip it with the 181 horsepower, 2.4-liter engine.

The Tuscon is one of the least expensive cars on the list, sitting well below $25 000.

Choosing a crossover SUV is difficult when you consider just how many of these vehicles are still on the market. That’s why we’re here to help you make sense of the specs and details of the best crossover SUVs on the market this year. If you have any questions that we haven’t answered thus far, feel free to contact us today and we’ll get back to you as soon as possible. 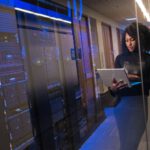